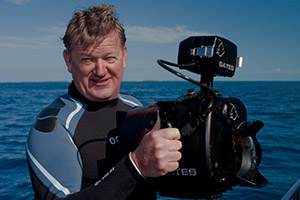 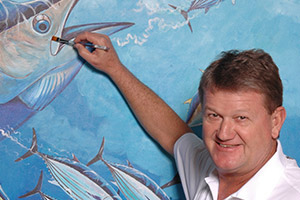 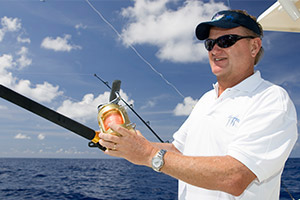 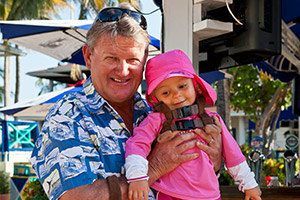 Guy Harvey is the man behind Guy Harvey Outpost. Guy is a unique blend of artist, scientist, diver, angler, conservationist and explorer, fiercely devoted to his family and his love of the sea. Growing up in Jamaica, Guy spent many hours fishing and diving with his father along the Island’s south coast. He was obsessed with the creatures of the sea and began drawing pictures of the many different fish he observed. A 10th generation Jamaican of English heritage, Guy’s natural gift to recreate marine life has propelled him from Professor of Marine Biology to a Wildlife Artist and Photographer.In 1985, he depicted Ernest Hemingway’s famous fishing story “The Old Man and the Sea” in a series of 44 original pen-and-ink drawings and displayed them at an exhibition in Jamaica. Based on the positive response he received at this show, Guy began painting full time and, by 1988, was providing custom artwork for use on a variety of products. Today his work is well known around the world and he has earned a reputation as the John Audubon of marine art.

Guy began to travel the world to gain more knowledge of the habits and activities of marine wildlife. He became an avid scuba diver and skilled underwater photographer. He pioneered a technique of diving and photographing free-swimming billfish. His personal observations made during these diving expeditions have better enabled him to capture the detail in his paintings that contributes to the popularity of his work.

With his great love of the sea is combined with a scientist’s understanding of the serious threats facing the world’s fish resources and biodiversity, in 1998 Guy established the Guy Harvey Research Institute in partnership with Nova Southeastern University’s world-renown Oceanographic Center. The institute’s mission is to provide scientific information necessary for effective conservation and restoration of fish resources and biodiversity. The GHRI has research projects currently underway in all major areas of the globe.

As an ardent conservationist, Guy has consistently supported “catch and release” fishing ethics for game fish around the world. He works closely with many conservation organizations to help protect global fishery resources. In 1986, he was selected as Jamaica’s representative to the International Game Fish Association and in 1992 was appointed as a Trustee. In 1998, Guy was voted the IGFA’s first ever “Lifetime Achievement Award”.

Guy currently maintains his art studio in Grand Cayman, where he lives with wife Gillian and their two children, Jessica and Alex. Whenever possible, Guy takes his family on his globe-circling fishing and field research trip.